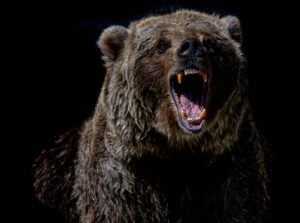 (The author of this content prefers to remain anonymous, but it is being shared with the author’s permission.)

Don’t take this as survival advice but I’ve been told that if you encounter a bear in the woods the following things are important to know:

I want to let you in on a little secret that you might not be aware of.

We are the bear.

Twenty years ago? Not the bear. Today. Bear.

Survey by Gallup from last year.

What does it tell us? 70% are in favour of same-sex marriage. 55% of Republicans do so. In Canada those numbers are about 10% higher according to all the polling data that I have seen from various sources.

Now there is a survey of a particular Midwestern denomination done in 2016. There is something very interesting about the numbers that we have access to: this denomination’s reported numbers that matched society’s trends.

It means that unless you’re in an outlier community (and there are some congregations that exist within that realm) then it means that the majority of the people around you support same-sex marriage.

They may not be fully affirming. They might sit within that messy moderation that is struggling with how to reconcile what they’ve been taught with what they are experiencing. They might not be interested in a fight.

But they are with you.

As are demographics. And time. And societal conditions for long term systemic change. (And Jesus! Amen?)

This trend is linear. You’re seeing the issue drop off of political radars because once an issue crosses the 70% threshold you can’t fund-raise on it anymore. Major donors walk away from issues that will damage profit margins.

Does that mean that the battle is over? No. There are those that this dude does not Abide with who have entrenched themselves within a system and are seeking short-term power (I will write on this later – but I can say this – if we remain despite their efforts we will prevail.)

…the power of the party.

Not the political party. Not the faction. I mean, quite literally, the party. As in dinner, board games, fellowship. You know, fun?

People are generally worried about the consequences of being on the side of change.

I once had an intriguing, entertaining, kind of sad conversation with a woman in her 50s. She was personally in support of LGBTQ+ people but didn’t want to push it in church because she was afraid that her mother in her 70s wouldn’t be able to accept it and it would hurt their family.

It is the basic premise of the Creation story – even before sin entered the world and when everything was good – it’s not good to be alone.

This is what those with whom this dude does not Abide know and why they are drawing from the survival playbook.

They are being loud and they’re making themselves look big and strong and powerful. This is why they show up in force to meetings and speak like everyone is with them. This is why they threaten and beat their chest and roar with indignation.

It’s a suppression tactic to try to keep people afraid of being isolated.

(It completely explains the ridiculous beards.)

But, again, what does the data show?

If suppression and isolation is the tactic that the opposition is employing then we have to counter with something that meets it head on.

This suggests that the best approach for reaching those who are moderates, unsure, or with us but silenced is not winning the debate that they want to draw us into.

It’s hospitality. Recognizing that our strength is in community. Our bear-like strength is found when we realize our size.

It’s not a movement. It’s not a team. It’s not a side. We are simply a community of normal relationships where support for LGBTQ+ people is normal too.

This is why we’ve seen linear progression in general society – from a place of taboo to wide acceptance – because loving LGBTQ+ people, accepting them, supporting them, being friends with them IS normal because they ARE normal.

How do you wake the bear?

Host some great parties (actual parties – not bait and switch conversion events!). Gather together your allies. Invite your mushy-middle friends. And simply be okay with gay.

No agenda but love for each other and more will be added to their number on that day.

(You know, this works with evangelism too. It’s rare that people are argued into Jesus – my experience is that people are usually enfolded into him through hospitality.)